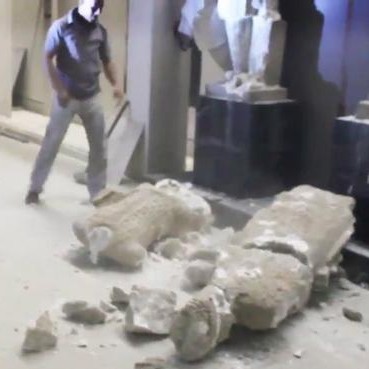 For the last few weeks there has been a flare of media coverage regarding members of the Islamic State destroying artifacts and ancient Mesopotamian artwork in the occupied city of Mosul, as well as apparently bulldozing the ancient cities of Nimrud and Hatra. The reaction to this has been pretty intense, with articles proclaiming that “Isis destroys Iraqis’ heritage”and “Isis erasing history”, and U.N. Secretary-General Ban Ki-moon even referring to the vandalism and destruction of inanimate objects as “war crimes.”

While i share feelings of shock and outrage that these artifacts are being destroyed (i have a degree in anthropology, so it’s mandatory), i’m a bit amused and fascinated that these actions are getting such attention and vigorous condemnation. In light of all the awful behavior of the Islamic State, why does this recent string of intense vandalism seem to garner this sort of attention?

You see, most of us in the west and the globalized world operate within a particular narrative or story about who we are, where we come from, where we are going, what makes us who we are, and why we are the way we are. Very rarely is this story, or history, ever given much thought. It just seems so obvious. I’m sure you know it. It often involves big bangs, human evolution, agricultural revolutions, ethical/human progress, linear time lines, industrial revolutions, colonialism, technological capacity/energy capture buildup, and the investigation of reality through trial and error. We believe we know this story because we have this special device, science, with which we can discover the nature of reality.

However, just because we “know” this story to be true, doesn’t mean everyone everywhere buys into this. For those who don’t buy into this story, as many of the members of the Islamic State don’t seem to, the sources of our personal and cultural narratives make excellent targets. Artifacts like those destroyed in Mosul, Nimrud, and Hatra are like engines constantly acting as reminders and sources of our narratives. We place so much importance on physical and inducible evidence, that were this source of our story to be taken away, we might actually lose our particular reality. So, if your reality isn’t based on ideas about progress, an almost 14-billion-year-old universe, and liberalism, then artifacts like those in Mosul, Nimrud, and Hatra are prime targets to attack.

Not only do these acts of vandalism damage the source of our reality, they are also outside of our reality, and thus damage our reality itself. If someone can demonstrate an alternative reality to ours, it damages the hegemony our history has over reality. Our story already understands and even sanctions things like armies, war, human casualties, and crimes against humanity. But crimes against reality?

If the Islamic State were to raise armies to fight our armies, bomb our cities, and even preach its opinions over ours, we could understand. But to attack something we assume to be inherently and universally valuable is the sort of thing that can cause existential crises. Crises that can cause us to actually question our beliefs about human nature and whether or not human progress is actually assured. Also, this sort of behavior is the kind of thing that can’t really be co-opted into the spectacle of mass media, the sexy world of money and prestige, or the normal Westphalian norms of nation building. Unlike most boogie-men in our history, the Islamic State doesn’t want to become us, nor is it interested in many of the fruits of our society.

This is why the recent vandalism by the Islamic State is so upsetting.

The smashing of these statues and cities:

1) damages the source of our history

2) damages the monopoly of our history over reality

4) damages our faith in one of our greatest weapons (co-option and appropriation).

These don’t seem like the sort of people we can bargain with or hash out a nice treaty with.

The next time you hear of the Islamic State, or any organization, destroying priceless “pieces of history”, don’t be deluded into thinking this is an act of ignorance or an act of insanity. These are acts of extreme will, and are a testament to the real power these actors are bringing to the world stage. It’s not often that histories, rather than nation-states and armies, go to war.
This is why our culture is so panicked by the loss of artifacts.