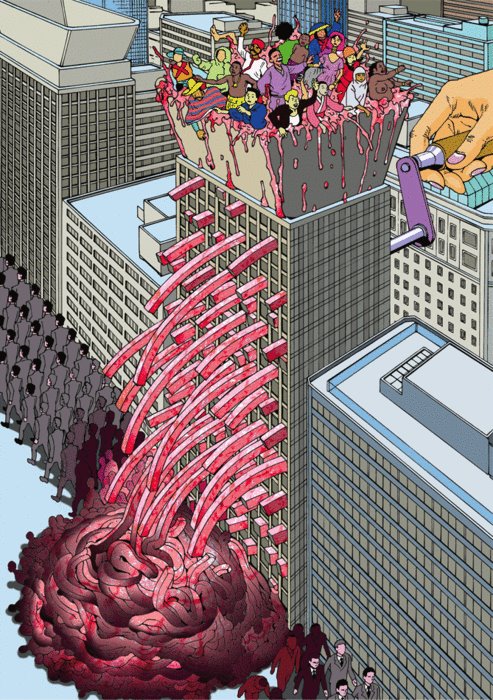 (edit: I’m seeing conflicting reports as to whether this plan is still going through)

So here’s the situation as I understand it:
Last year the tanzanian government was going to forcefully kick tens of thousands of Maasai herders off of roughly 1,500 square kilometers of Maasai ancestral land to make room for a “wildlife corridor”. The “wildlife corridor” apparently would just be a big game/safari hunting lease for the dubai royal family. It seems that the outrage over this plan got big enough that the government backed down. But now, the plan is back on and some 40,000 Maasai have to leave the area by the end of the year. It’s ok though, because 1 billion tanzanian shillings will be allocated to “development projects”, though I don’t know if those development projects will cater to displaced Maasai or not.
If the plan does go through and these people are kicked off this land by government violence, then they will largely be landless herders, unless they can find land elsewhere. If indeed some do end up landless herders they will in effect, not be herders. What will they do? Well, I imagine a good portion of these people will have to get jobs, either in agricultural industries in the countryside or in commercial and manufacturing industries in the city.
When all is said and done, the tanzanian government will have killed three birds with one stone.
1) It will get whatever payoff and revenues come with the business dealing with members of the dubai royal family and whoever pays to use the hunting grounds, so bigger coffers for the state and probably pleasant payoffs for the functionaries involved.
2) It will diminish, in part, a distinct socio-ethnic group within its borders. When people give up indigenous and ancestral lifeways for jobs and lifeways within the sphere of world capitalism, they more or less, over a few generations, meld into the larger generalized culture and cease to represent any distinct culture or worldview that needs to be catered to. A state benefits from this because the more homogenized a governed populace is, the less likely issues of balkanization, secession, devolution, semi-autonomy, and sectarian strife are. Even without political unrest, states with many distinct ethnic and linguistic groups often have to spend a lot of time, money, and political capital catering to various distinct social and political interests to keep the peace. The more Maasai people give up their distinct identities the smoother the machinations of the state become. Also, the more people identify with some sort of generalized ‘tanzanian’ nationality instead of various distinct ethnic groups, the more power nationalist state propaganda campaigns will be.
3) These people, divorced from the lifeways they know, will have to take bottom of the barrel work. Work as farm/manufacturing/and industrial labor come to mind. Displaced people generally have nothing to sell other than their labor, their bodies. This means that the folk who benefit from this kind of cheap labor (factory owners, owners of large scale agricultural operations, retail business owners, etc.) get an influx of desperate people who have no better options. And since these sorts of jobs will be in higher demand, owners of capital will be in a better position to pay them less and less. In effect, the capitalist economy (locally and globally) will have an injection of artificially cheap labor. Labor made artificially cheap, not by “free market” forces, and not by the free rational choices of equal human beings, but by state violence. This benefits the state because now the industries that can easily be taxed, regulated, and incorporated into a larger national/capitalist regime have a larger pool of cheap labor that can compete on a world market in terms of prices. It’s not so easy to tax and exploit free people living off the grid with sustainable lifestyles. Better to make those sustainable lifestyles inaccessible and force people into wage and rent slavery. It’s for the economy!

This is all within the framework of what the author and theoretician Kevin Carson calls “the Subsidy of History”:

“A considerable number of libertarian commentators have remarked on the sheer scale of subsidies and protections to big business, on their structural importance to the existing form of corporate capitalism, and on the close intermeshing of corporate and state interests in the present state capitalist economy. We pay less attention, however, to the role of past state coercion, in previous centuries, in laying the structural foundations of the present system. The extent to which present-day concentrations of wealth and corporate power are the legacy of past injustice, I call the subsidy of history.”

and
“Manorialism, commonly, is recognized to have been founded by robbery and usurpation; a rul­ing class established itself by force, and then com­pel­led the peasantry to work for the profit of their lords. But no system of exploitation, in­clud­ing cap­it­al­ism, has ever been created by the action of a free market. Capitalism was founded on an act of rob­bery as mass­ive as feudalism. It has been sus­tain­ed to the present by contin­u­al state inter­ven­tion to protect its system of privilege, without which its survival is unimaginable. The current structure of capital own­er­ship and org­an­iz­ation of production in our so-called ‘market’ eco­n­omy, re­flects coercive state intervention prior to and ex­trane­ous to the market. From the outset of the industrial re­vol­ut­ion, what is nostalgically called “laissez-faire” was in fact a system of continuing state intervention to sub­sid­ize ac­cum­ulation, guarantee privilege, and maintain work disci­pline. . . ”

You see, this is a cornerstone of how historic capitalism has behaved, how capitalism as is behaves, and how future capitalism will behave. Despite what status-quo liberals and conservatives believe, the market is not the central impetus of capitalism any more than land was the central impetus of feudalism. Both markets are needed for capitalism and land is needed for feudalism (though they are not equal in this comparison in how each served the respective forms of production I’m mentioning), but neither can be said to naturally give rise to either capitalism or feudalism.
The radical disparities in wealth, the existence of wage and rent slavery, and the hierarchies of power we rightly see as fundamental to capitalism are the consequences of power and violence like we see in the case of the tanzanian government displacing and gearing up to exploit the Maasai people within its borders.
Whether it’s the u.s. government robbing lands from Native Americans equal to the size of france to give to railroad companies or using eminent domain to rob land from small farmers to be given to oil companies for pipe-lines, whether it’s the chinese government kicking millions of peasants out of ancestral lands to become proletariat living in government housing projects so that their land can be flooded for the largest dam project on earth, whether it’s the malaysian government robbing land from the foraging Penan people to open up forest to logging, or whether it’s the english government passing enclosure laws to forcefully privatize land that was once was communally managed by free peasants for the sake of large wool ranchers and textile manufacturers, it’s all capitalism and it’s all statism.
So long as any of us believe in the continued existence of statist government, “capitalist”/”socialist”/ or “communist”, this sort of violently backed privilege for the powerful and disenfranchisement of the less powerful will occur.
I didn’t write this post to lay out a good explanation for how the subsidy of history and enclosure laws are fundamental to capitalism, I just was struck by how the situation of the Maasai within this proposed ‘wildlife corridor’ is such a blatant contemporary example of it all. I hope they aren’t kicked off their land in tanzania, but if they are it’s nothing new, sadly.
I’ll toss some links down at the bottom if you actually want a good explanation for the theory and history behind all this.

The articles concerning the Maasai and their possible eviction:
http://www.theguardian.com/world/2014/nov/16/tanzania-government-accused-serengeti-sale-maasai-lands

The tanzanian government may not be going through with the planned eviction anymore.
http://www.africlandpost.com/tanzania-stops-plan-evict-masai/

Works by Kevin Carson concerning the Subsidy of History (these are important)
http://fee.org/the_freeman/detail/the-subsidy-of-history

The plight of the Penan in Malaysia:
http://www.dailymail.co.uk/news/article-2305446/One-tribes-war-corporate-greed-How-Penan-people-Borneo-fighting-preserve-forest-loggers.html

The mass relocation and exploitation of chinese peasants:
http://en.wikipedia.org/wiki/Forced_evictions_in_China